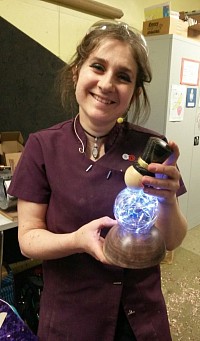 Emma's project for this demonstration was a snow man with glass ball body full of LED lights.

Here are a few key points from the demo:- 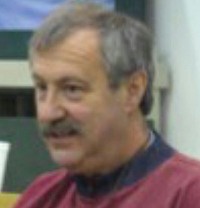 Chris did a great job not only of promoting the virtues of some of the Robert Sorby range of tools but of demonstrating in simple clear terms how to use some of the tools to the best effect.

Here are some of the key points:-

Chris gave us too many tips to cover here, gave a good show with lots of laughs and sold us lots of Robert Sorby tools. 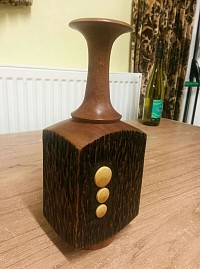 Steve had prepared the blank by drilling on end and drilling three small holes in the side to receive the three buttons.

Steve says any wood will work for this design. The wood used here was sapele for the body and box wood for the buttons.

The excellence of Steve's turning and indeed the sharpness of his tools shows to good effect on the shoulders of this piece. It was also when sanding the shoulders that particular care was taken due to the hit and miss of working on round to square (rectangular) sections.

To get the effect on the rectangular body section Steve used a powerd cutting tool though clearly one could experiment wth different methods to etch the surface. This was followed with black acrylic which when dry was sanded back.

As you would expect from Mr Heeley the peice was then reverse chucked on a jam chuck to allow the base to be finished.

The wood used in the demonstration was Alder cut from Mike's own woodland.

Only a few different tools were used. These were hook tools specially made for pole lathe work and not at all like the tools most woodturners are familiar with.

Cold presses linseed oil was one of the finishes recommended by Mike.

The chareter of pole lathe work is quite different to what many of us work towards, the nature of the wood and the effects of seesoning after turning being allowed to show through.

Also notable how muich physical hardwork there is in pole lathe work. 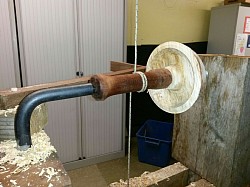 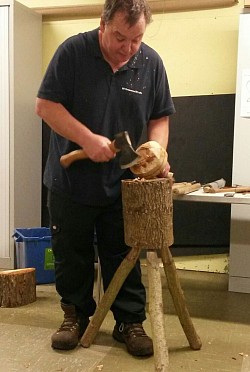 The pictures below are a better description of the project than I can put in words. A stained pot with aluminium finial is the best I can do.

Please click here to see the text of the email Rick has kindly sent us detailing much of the information we would need to have a go. 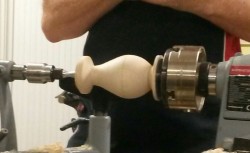 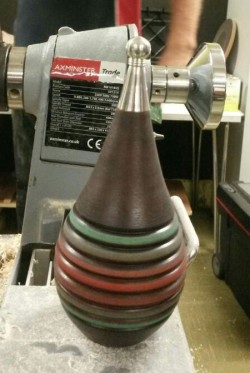 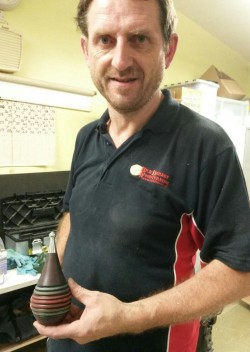 Some of Dawn's work

Dawn began her demonstration with some explanation of what she had set out to try and achieve and perhaps the big lesson was how much can be achieved through imagination, research and experimentation. Dawn included us all in this journey showing some of what went well and some lessons from the experimentation.

In essence the techniques demonstrated all involved cutting wood up and sticking it back together.

The first technique shown involved blanks for pens or other small items. These were sliced with a wavey line down the length and then joined back together with a variety of materials sandwiched in the joint. This provides a coloured slice down the blank. Repeating the process with the blank rotated on it's axis gives additional interest. Materials used in the sandwich included craft paper, linnen, magazine pages, sections of drinks cans etc. Glue used was either superglue or cascamite. Selection of glue dependant largely on absorbency of materials but both somewhat challenging on intricate work. If trying this technique, have a clamping system ready before starting.

A second technique shown was to create a segmental blank. This was achieved by fixing a light coloured and dark coloured bowl blank together one on top of the other (temporary fix) and then cutting the two blanks together into what might be described as a jigsaw pattern. The pieces from the light and dark wood are then numbered so that there are two of each number the same shape but one dark and one light. The light and dark pieces are then jumbled up and assembled into mixed light and dark to reform the blank. Dawn had used cascamite for the reassembly of the blank and did say that this was challenging as there was much to be glued together before the glue went off. Gloves recommended. Dawn did point out that such a blank should be mounted in compression jaws not expansion jaws as a matter of safety.

Many thanks Dawn for an excellent demonstration with lots of explanation. 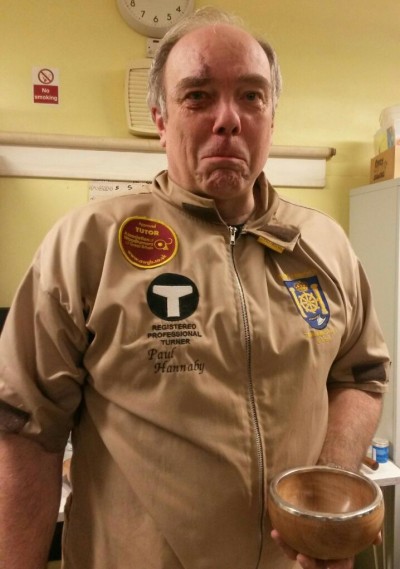 Paul demonstrated techniques for working with pewter used in conjunction with wood.

The main part of the demonstration was the production of a bowl with pewter rim.

Some of the key points:-

Form a tenon on the rim of the bowl to act as a key. A matching mortice is formed in the pewter rings once cast

To cast ring, using a fine grained material (Paul used MDF) cut a recess of width and depth to suite

Once pewter ring is fixed to rim of bowl it can be turned much like turning wood (same tools). Sanding and finishing is also much the same though on light coloured wood care is required not to discolour or scratch wood after abraisives and clothes have been in contact with pewter.

A second part of the demonstration focussed on cutting threads on pewter for use in lidded pots.

Form a recess at inner end of thread to allow thread cutter to have open space to travel into before lifting away. 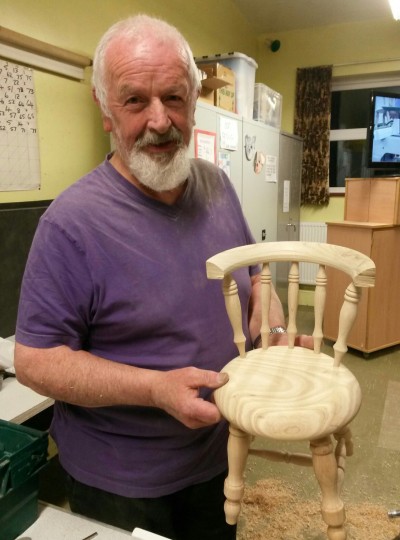 Ray gave us an entertaining and very informative evening.
His demonstration project was the chair shown in the photograph. Through the stages in this project Ray pointed out a number of key points. 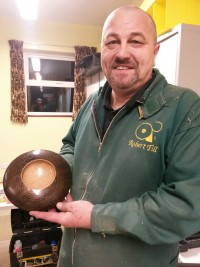 Rob gave us a great demonstration on the production and decoration of a "discus bowl".

At the outset of his demonstration, Rob passed round sheets listing the key steps for the two finishes he later demonstrated. This also had a useful list of the finishing products he was using.

During the evening, Rob turned a discus bowl from some fairly dry and dusty oak. Oak was chosen for its open grain.

The upper face of the bowl Rob had turned was treated with Ebonising Lacquer, gold gilt cream and finishing oil (all products from a popular manufacturer). This is the piece pictured.

Rob then did the Blue Peter trick and pulled out a similar bowl and again decorated the upper surface, but this time with spirit stains. A great effect was achieved and, during the process, there were plenty of tips and instructions.

It was notable how few tools Richard used. This was a lesson in itself.

Richard shared tips and tricks as he worked. At the end of the evening, he passed round the piece of work he had produced with the comment that it needed a bit more work doing to it to be of a standard to come out of his workshop. Members who examined the work with the typical critical eye of a turner looking at another turner's work, were well impressed and struggled to find anything that could be improved.

This meeting was in two parts.

Firstly the AGM. The meeting was well managed by our Chairman.

The second part of the meeting was a sharpening session. A couple of members brought in their preferred sharpening equipment allowing members to see sharpening techniques, get their tools sharpened, have a go and compare the relative merits of different systems.

Our Chairman Steve Cassidy stood in at short notice and gave us a good demonstration of two projects and what to do when you spill a jar of sanding sealer.

Steve's first project was "penguins". Difficult to judge size from the picture, but these were about 30mm tall. Ideal Christmas decorations.

Steve then went on to make a bowl with an inlay ring. The inlay ring was pre-made from a hard baked putty type material. The challenge Steve then gave himself was to cut a recess in the rim of the bowl such that the pre-made ring was an exact fit to the recess.

Something we all learned from Steve's demo is not to be frightened to have a go at something different or even at standing up front and sharing your ideas.

Made on my Android phone
Wood-U-Like